Look to the Background

On any computer you use, the operating system has many programs that run in the background. Many of these background apps are intended to improve functionality and performance. However, some background apps, depending on how you use your machine, can steal valuable CPU time and memory that you could use elsewhere. 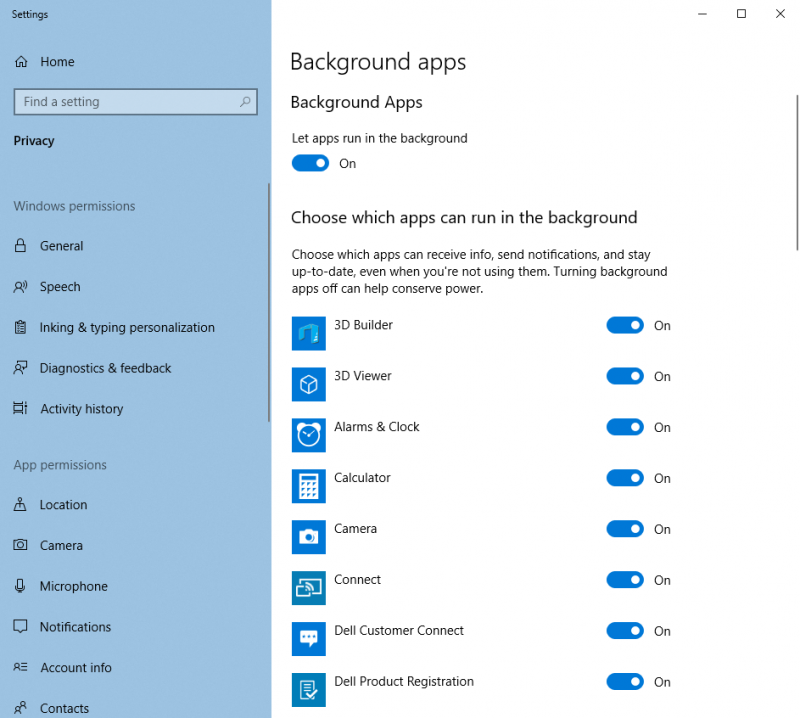 For my machine I have determined that I can turn four apps off—Microsoft Solitaire Collection, 3D Builder, 3D Viewer, and Print 3D. To turn them off I simply click on the On/Off toggle to the right of each app. (See Figure 2.)

Figure 2. Click on the On/Off toggle to turn background apps on or off.

Once you have completed your choices you can close the dialog box and your choices will take effect. You will want to keep in mind that some apps such as Edge, One Note, Calculator, and Skype are helpful to have running in the background, again depending on how you use your machine. You'll want to go back in from time to time to go through your list to see if anything has changed. When you update your operating system, or install new apps, the list can change.

With you in control of the background apps you should feel confident that your CPU, memory, and other valuable system resources are being used for the items you want.

The later updates to Windows 10 introduced blurred background images on the sign-in screen. If you prefer to have the ...

Notes that Stick Around

Throughout your day it can be necessary to quickly write things down to quickly remember later. Unfortunately, a Post-It ...

Installing fonts within Windows 10 is now quicker and easier. By using the new drag-and-drop install method, your fonts ...

As you no doubt know, Windows has a built-in clock that is used for a variety of purposes. This tip covers the various ...

One of the personalization settings you can control is how fast the cursor moves when you move your mouse. You can ...

Windows is rather configurable, especially when it comes to the user interface. Here's how you can modify the way that ...

Good Tip, but on my system (1809) it doesn't work. "Background Apps" took me somewhere else unrelated.

I had to type only "background" and then scrolled down and selected "choose which apps run in the background."

Although I recognize they are free and I love your tips; I suggest you verify each on the current systems before you publish them. In spite of their overall helpful nature, each misguided tip could diminish all of them.