When your hands are on the keyboard, you may find it a waste of time to switch to the mouse. Or, it may be that you somehow got a window "stuck" at the top of your display such that you can't click its title bar in order to move it. In such cases it's good to know that there are keyboard solutions to moving and sizing your open windows.

Both moving and sizing are initiated by pressing Alt + Spacebar. When you press this combination, a small menu appears at the upper left of the active program window. (See Figure 1.) 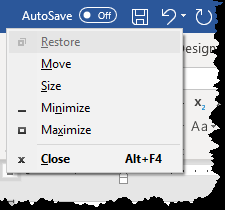 When you press the "M" key, your cursor turns into a 4-headed arrow. You can then move the active window via the arrow keys. When it is positioned where you want it, press Enter to terminate Move mode.

Windows currently comes in two flavors: 32-bit and 64-bit. While there are typically some performance advantages ...

Deleting a library can be done with a couple of mouse clicks. And even though you delete the library, the folders and ...

Using Windows with a Projector

If you want to show what's on your computer screen through a projector so that others can see it, the process is about as ...

Getting the Steps Down

Often when we are using our computers, we need to remember certain steps that we take, either for ourselves or to show ...

Locking Icons on the Desktop

Your desktop is supposed to be place where you can put your most-often-used program and file icons. You can spend hours ...

One of the big new features of Windows 10 is the ability to create new virtual desktops. This tip tells you about them.

Sure that works, I use it myself.
.
It would be nice if you mentioned the "new" way of doing the same, Windows "Snap". That is using the <WIN> key along with the arrow keys to move windows to the various edges of the screen and to setup 2 or 4 open application windows on the screen.