I have discussed the Xbox Game Bar before and how it is an often-overlooked feature. In that tip I went over the settings found within System Settings relating to the Xbox Game Bar, and in this tip I want to look at what you might see when you launch Xbox Game Bar.

Xbox Game bar is more than just a tool for gaming purposes. It can be used for video capture and recording what you do on your computer. Launching the Xbox Game Bar is easy as Windows 10 includes a handy keyboard shortcut, Win+G. When you press the shortcut, Xbox Game Bar launches, dimming your screen slightly and presenting you with some overlay panels. Note: if you press Win+G and nothing happens, you may not have Xbox Game Bar installed. If this happens to you, launch the Microsoft Store app and download the Xbox Game Bar app. (See Figure 1.) 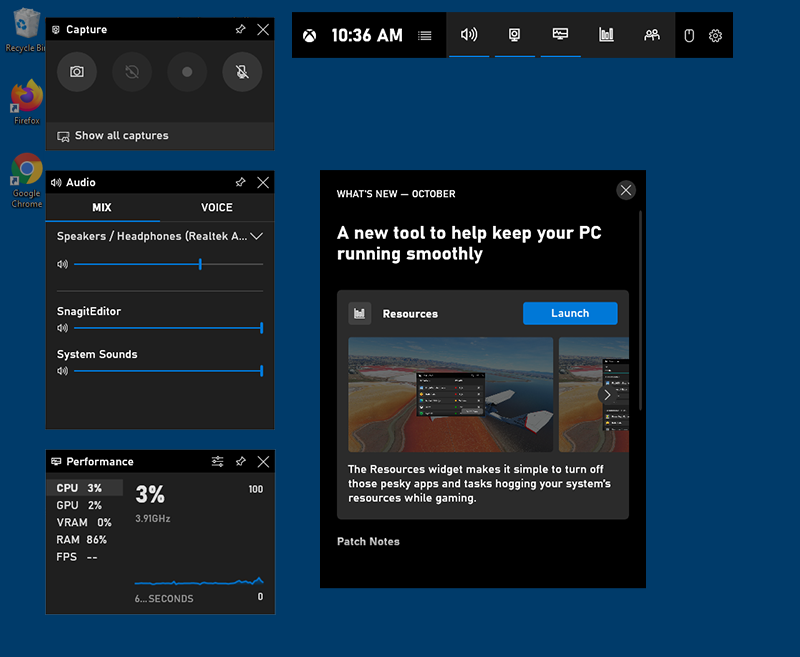 Typically, the first time you launch Xbox Game Bar there will be four items on your screen, and possibly a What's New window. The four items you will see are the Game Bar (typically at the top,) followed by the Capture widget, the Audio widget, and the Performance widget, typically to the left of the screen.

For the remainder of this article, we will go over the Game Bar itself. The Game Bar, by default, is broken up into nine parts: Clock, Widget menu, Audio, Capture, Performance, Resources, Xbox Social, enable/disable Click-through, and Settings.

The clock is exactly what you think—it tells the time, the same as your system clock.

When you click on the Widget menu a drop-down window shows a list of widgets you can open. By default, these options include Audio, Capture, Gallery, Looking for Group, Performance, Resources, Spotify, Xbox Achievements, Xbox Social, and The Widget Store (beta). Some items have stars next to them, used to mark the option as a favorite. Favorites are what show up in the Xbox Game Bar itself. If you simply click on an option, it will open the widget but not add it to the Game Bar unless you marked it as a favorite.

Clicking the Audio widget opens the widget at the left side of the screen. By default, the first time you open Xbox Game Bar this widget will already be opened, as shown in the figure above. From this widget, you can mix the various volume settings for different items on your system allowing you to turn up the speaker or headphone output while lowering the volume of system or program sounds.

The Capture widget opens the widget at the left side of the screen. By default, the first time you open Xbox Game Bar this widget will already be opened. The Capture widget is used for capturing a screenshot, DVR-type recording, and video recording. It also includes a button that allows you to mute the microphone and a button to pull up all the captures you previously captured through the Xbox Game Bar.

Like the Audio and Capture widgets, the Performance widget also opens the widget at the left side of the screen. By default, the first time you open Xbox Game Bar this widget will already be opened. It allows you to see how your CPU, GPU VRAM, and RAM are performing, along with the FPS (frames per second) of the game you are playing.

The Resources widget functions similarly to the Task Manager. You can see what apps are running on your system and what system resources are being used by those apps. The Resource widget even allows you to close or cancel the tasks that might be causing your system to slow down.

the Xbox Social widget allows you to connect with any other friends also using Xbox Social or community. You will need a Microsoft account to use this feature.

This is an on/off toggle button. When you are playing a game and have open widgets, you might need to click behind the widget. Rather than moving the widget so you can get to what is behind it, this feature allows you "click-through" the widget as though it wasn't there, which allows you to still play the game.

This Settings button opens settings that can be controlled within the Xbox Game Bar setting itself.

This brief overview of the default settings for the Xbox Game Bar will help you better understand the basic parts of this powerful and often overlooked feature found in newer builds of Windows 10.

Have you ever needed to quickly share something with another computer? With Nearby Sharing, part of the Windows 10 April ...

With multiple devices used today, the way we scroll can change depending on the device. If you're used to reverse ...

When your computer is not running the way it should, you can try a clean boot. A clean boot in Windows 10 provides more ...

Have you ever needed to scroll through an inactive window while keeping another window active? This tip will show you how ...

Windows does a lot of nuancing to provide the user with a pleasing visual experience. All this attention to detail, ...

One of the personalization settings you can control is how fast the cursor moves when you move your mouse. You can ...