The concept of a jump list can trace its roots back to versions of Windows that display "recent documents." The idea behind jump lists is that applications (such as Microsoft Word, Microsoft Excel, Notepad, etc.) can keep track of the documents that that application has most recently accessed.

For applications on the Start menu, you can tell if it has a jump list because there will be an arrow to the right of the application name. The following figure is what's currently on my Start menu. (See Figure 1.) 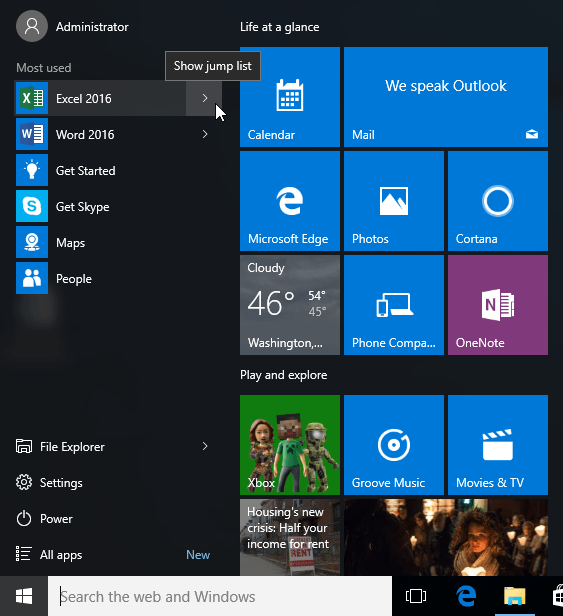 Of the items listed, the three of them have associated jump lists: Excel 2016, Word 2016, and File Explorer. This means that I can click the right arrow beside one of the applications and see the recently opened documents associated with that application. (See Figure 2.) 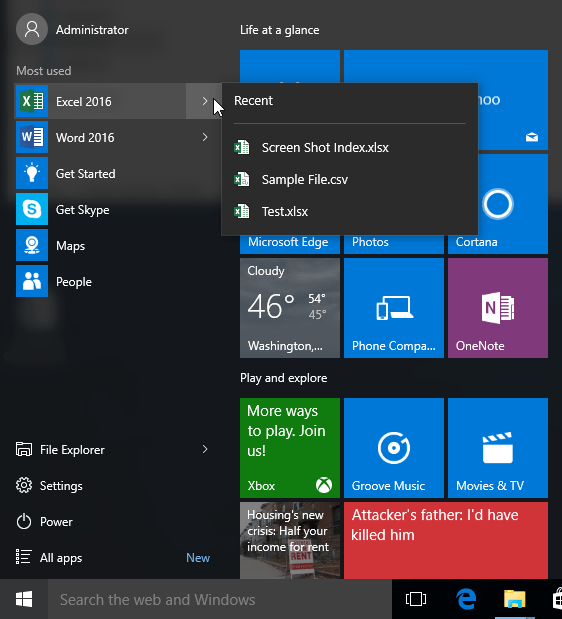 This shows the three most recently accessed workbooks for Excel 2016. Clicking on one of these will open that workbook. 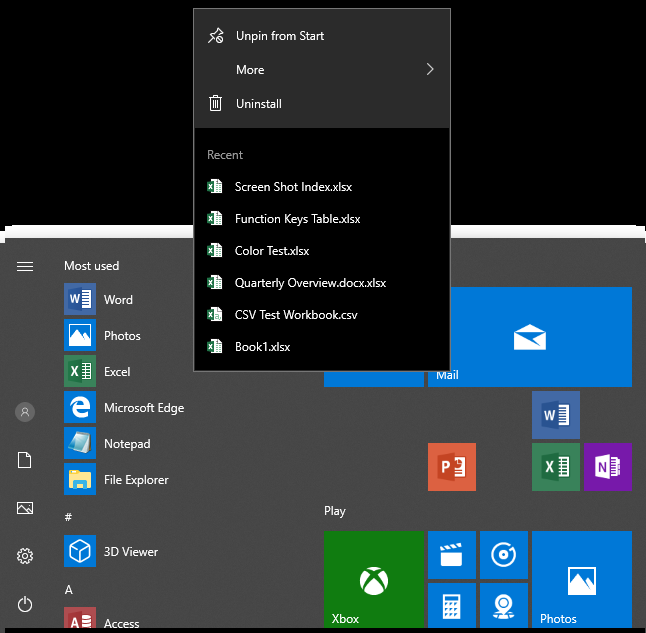 It may not always be a good thing to have Windows automatically restart your computer after an update. This tip tells you ...

One of the many things you can do with Windows Media Player is to burn audio CDs. This tip shows you how.

Although it's rare for RAM to go bad, it does happen. This tip tells you how to check for faulty RAM by using the Windows ...

Most of the objects that Windows makes available in its interface possess properties. These properties allow you to ...

It's possible that the Windows Explorer window may occasionally get out of sync with the data it's displaying. You can ...

Bluetooth is a popular technology that frees you from dealing with wires and cables, and it makes you a bit more mobile. ...

Funny thing, I saw the same jumplist question yesterday in another forum. The answer is to make sure you have 2 new registry entries

Increase the Number of Jump List Items in Windows 10 2019 09 23 Walter Glenn
https://www.howtogeek.com/267705/how-to-increase-the-number-of-jump-list-items-in-windows-10/
https://www.groovypost.com/howto/increase-the-number-of-jump-list-items-on-windows-10/
By default, Windows 10 shows around 12 recent items in the jump list. To increase that number, you just need to make an adjustment to one setting in the Windows Registry.

https://www.tenforums.com/tutorials/45535-change-maximum-number-items-jump-lists-windows-10-a-4.html
On page 4 of the comments, in 2020 a user identified a second key that had to be added, EnableXamlJumpView

I have looked everywhere to find out how to increase this for Office 365, but can’t find one. All my other applications (Corel, AutoCAD, Adobe) still work fine and show up to 30 recent files.
Can you please tell me how to increase the number in Office 365?

Note, I have already increased that number in Office applications, and yes, I can see them once the application is opened, but I want them on the task bar with a simple right click like they should be able to do...
Thanks

Thanks MW:
.
I used Fences years ago, when it was first released in beta form. I agree, it is a great tool.
.
I have used folders with shortcuts, but they are not as convenient as jump lists.

MRU's, Most Recently Used lists, are useless to me. The random display of the lists is contrary to the way I work.

I still find that creating and using shortcuts to my frequently used folders is more efficient. I organize all of those shortcut icons on my desktop using an inexpensive program called Fences: https://www.stardock.com/products/fences/

However, I also use a little known feature built right into Windows 10 called Recent Files.

It is a folder where Windows automatically stores shortcuts to ALL of your recently opened files and folders by their name and in chronological order. You just click on the shortcut and that folder or file immediately opens, right where you left it.

Navigate to the Recent folder on your C: drive:
C:\Users\<user name>\AppData\Roaming\Microsoft\Windows\Recent

Create a shortcut to that folder on your desktop, click away in bliss and relieve your own memory banks of trying to remember where that file was.

I found a registry hack to increase the number of entries in the list:
https://www.groovypost.com/howto/increase-the-number-of-jump-list-items-on-windows-10/

It works, kinda. After I made the change, Word 2010 increased the number of entries displayed. But at the very same time Word 2016 dis not display any more entries. <sigh>

I had already previously used the Word (2010, 2016) File menu > Options command > Advanced option to increase the number of entries in the recent display list to the max, 50 (not enough for me).