A system image is a snapshot of your system disk at a certain point in time. That image, properly stored, can later be used to restore your system. It is not unusual for people to create a system image of a pristine system—including installed software—before any data starts being accumulated on that system. If anything happens to the system that later requires a reinstall of the operating system, the system image is used as the "base line" for the new installation. (And, it saves a ton of time since you don't need to reinstall all the software—it is already on the system image.)

Creating a system image is a fairly straightforward operation and it can save you a lot of time if something catastrophic were to happen to your system. To get started, display the Control Panel. What you click from here depends on which version of Windows you are using:

Regardless of the version of Windows you are using, you'll then see the Create a System Image dialog box, which is the first step in a wizard to help guide you through the process. (See Figure 1.) 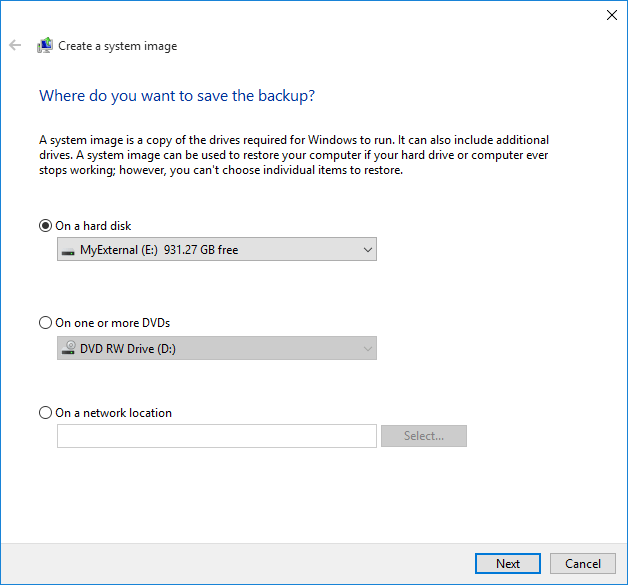 The wizard first asks you where you want to save your system image. You can save it to an NTFS-formatted hard drive (but not the system disk), a set of DVDs, or a shared network drive. You're next given the opportunity to save additional drives with your system image. (If you're building an image simply to use in a restoration process, you probably shouldn't select any other drives as that will just increase the time and space required to build your image.) You'll then be presented with a confirmation screen from which you can commence the build of the image.

Windows installs updates automatically by default. If you want to remove an update, this tip tells you how.

You may have the need to perform repetitive operations or group several commands together to run as a batch. In such ...

Gadgets can be fun and/or useful. If you want to free up a little desktop real estate, though, this tip tells you how to ...

Windows makes it easy to break the association between a network drive and its assigned letter. This tip explains how.

You can improve your efficiency at navigating the file system by using the Quick Access view. This tip shows you how to ...

Working with Compressed Files and Folders via Zip

Windows 10 provides multiple ways to work with compressed files and folders. One great way is to use the Zip utility, ...