The Task Manager is a useful tool for monitoring system activity, terminating misbehaving processes, and performing some rudimentary performance analysis. It runs at a higher priority than normal applications, and it has sufficient privilege to view and control the system's running processes. There are a few ways to invoke the Task Manager: 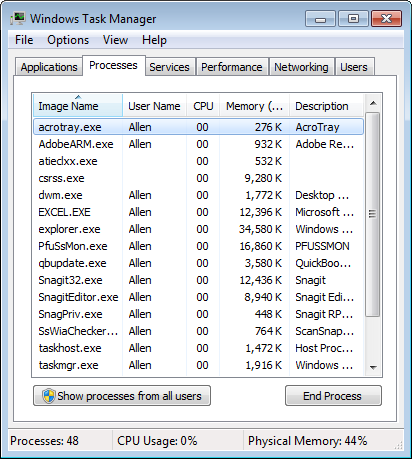 If you are using Windows 8 or Windows 10, the Task Manager dialog box will look similar to this: (See Figure 2.) 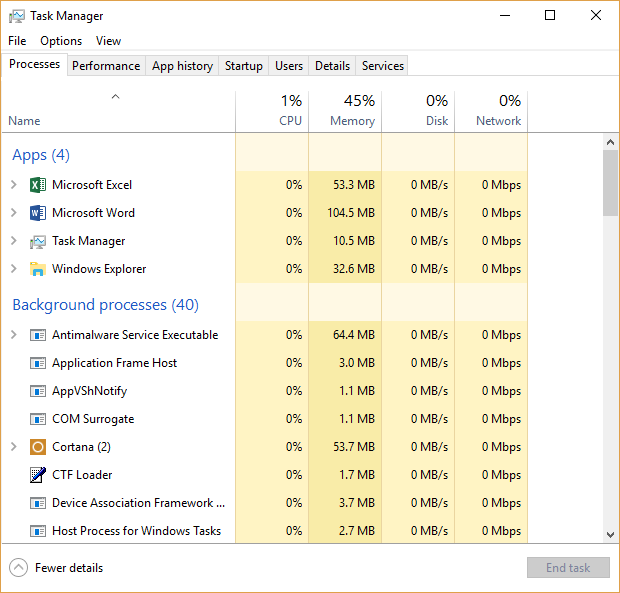 Note that of the six tabs (Windows 7) or seven tabs (Windows 8 and Windows 10) present in the dialog box, the Processes tab is current. As can be seen from the figures, the Windows 7 system has 48 processes currently running, and they are sorted alphabetically by Image Name. The Windows 10 system has 4 apps and 40 background processes running, and they are sorted alphabetically by Name. If you scroll down within the Processes window, you will see how many Windows processes are running. If you want them sorted in reverse order, click on the heading of the "Image Name" (Windows 7) or "Name" (Windows 8 and Windows 10) column. If, instead, you want to sort the window by CPU usage, click on the heading of the "CPU" column, etc.

While on the Processes tab with a Windows 7 system, sort the window by CPU usage to see if there are any processes that may be consuming a lot of the CPU. If so, you can right-click the process and reduce its priority or assign it to a particular CPU.

On a Windows 7 system, you can also sort the above window by one of the "memory" columns to see if a process's Working Set or Private Working Set is continually growing. Task Manager on a Windows 8 or Windows 10 system doesn't show whether a process is a Working Set or Private Working Set, but you can still see if the process is continually growing. This could indicate a memory leak, which will eventually adversely impact system performance. If this is the case, you may want to select the process and click the End Process (Windows 7) or End Task (Windows 8 and Windows 10) button to terminate it.

You can also use the information presented in the Performance tab to help evaluate system performance: (See Figure 3.) 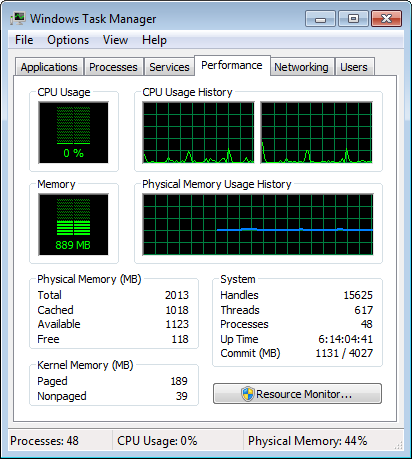 If you are using Windows 7, the key numbers to look at here are in the Physical Memory group. Watch the Available memory (1123 above). If this number gets too small relative to the Total memory (2013), then your system will start using the disk as virtual memory and your performance will suffer. Adding more memory to your system can help alleviate this problem.

The Performance tab looks quite different with a Windows 8 or Windows 10 system, as can be seen in the figure below: (See Figure 4.) 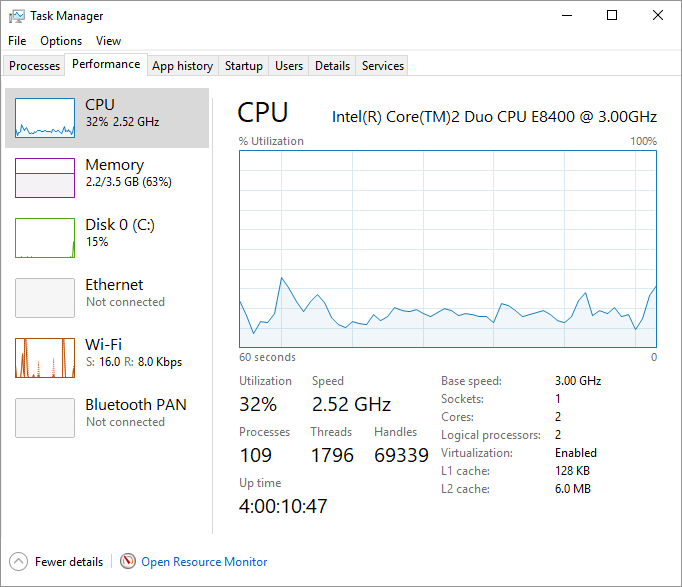 Unlike Task Manager on a Windows 7 system, you will need to click on the Memory option if you are using Windows 8 or Windows 10 in order to evaluate how much memory your system is using and what is available to use. (See Figure 5.) 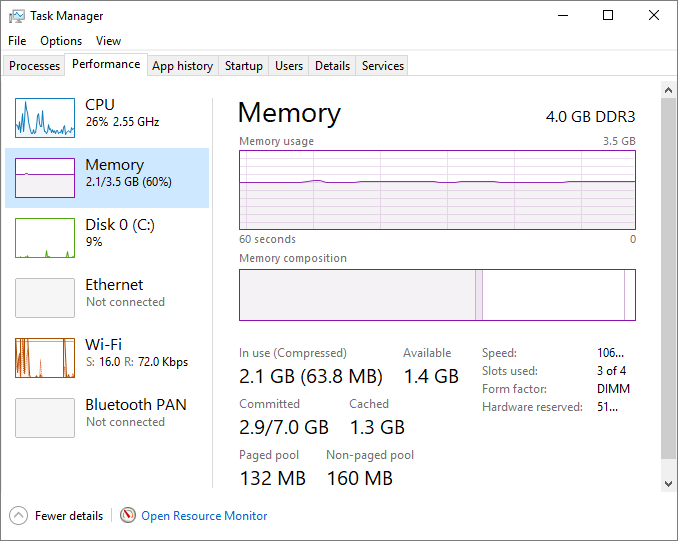 Figure 5. The Task Manager's Memory option of the Performance tab.

The Memory section displays the total amount of memory at the top of the window. The information displayed in the lower-right of the window shows the chip speed, the number of memory slots being utilized, the form factor, and the amount of memory that is reserved for use by the BIOS and peripheral devices' drivers installed on your system. Other numbers to look at are located below the two graphs. Notice the In Use (Compressed) and the Available numbers. 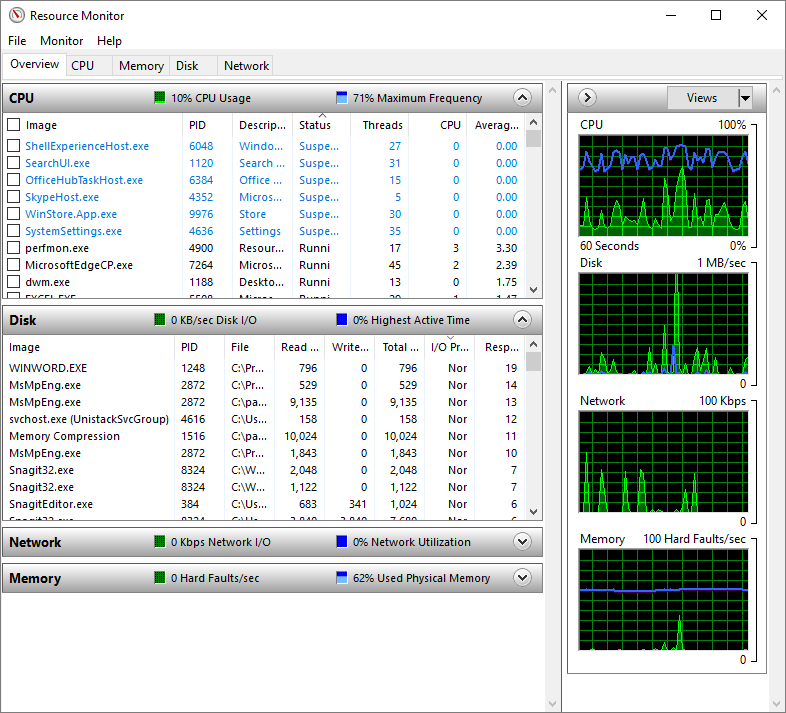 By using the Resource Monitor, you can get a good look at the four major components involved in system performance: CPU, Disk, Network, and Memory.

You close both the Resource Monitor as well as the Task Manger by clicking their Close buttons (Windows 7) or the X at the top right corner of the dialog box (Windows 8 and Windows 10).

Hiding Folders Under This PC

File Explorer is a virtual necessity when it comes to navigating the file system. If you find it a little too verbose, ...

You can use your system to create audio CDs that you can listen to in other places, such as your car. You just have to ...

You may have the need to perform repetitive operations or group several commands together to run as a batch. In such ...

Modifying the Size of Items in Windows

Having trouble seeing everything in Windows? Is the type or other objects simply too small? Here are some cool ways to ...

The Start Menu Search Box is a great addition to Windows. It can save you a great deal of time by putting frequently used ...

If you are done using Windows for a while, it is a good idea to shut down your system. Windows provides several different ...