Understanding Processes in the Task Manager

The Task Manager is a handy utility that gives you a bird's-eye view of what's going on with your system. It runs at a higher priority than normal applications, and it has sufficient privilege to view and control the system's running processes. You can invoke the Task Manager by using one of these methods: 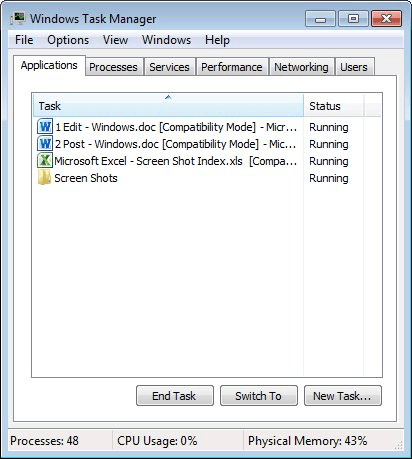 At the outset, you can see by looking at the bottom of the dialog box that there are currently 48 processes running, that they're using 0% of the CPU, and that they're consuming 43% of physical memory. When Task Manager is invoked, it starts on the tab it was on when it was previously closed. In this case, we see the Applications tab, which shows the titles of the currently opened windows. There is much more going on, though, than these open windows. To get a better look, in Windows 7 click the Processes tab, in Windows 10 click the More Details link at the bottom of the Task Manager dialog box: (See Figure 2.) (See Figure 3.) 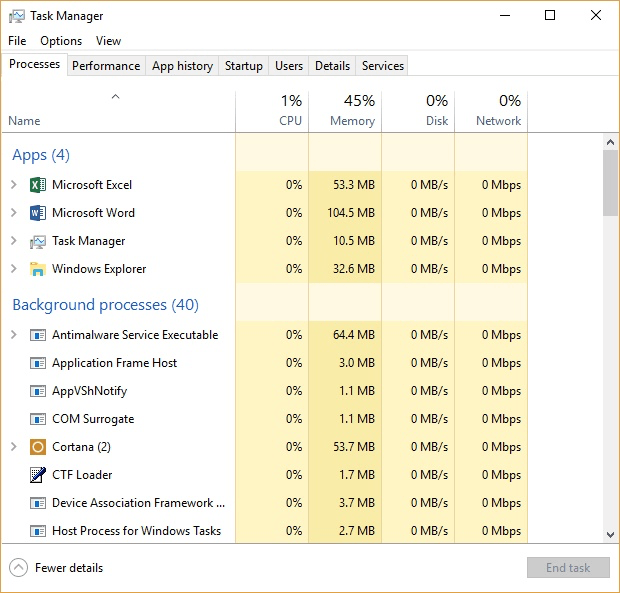 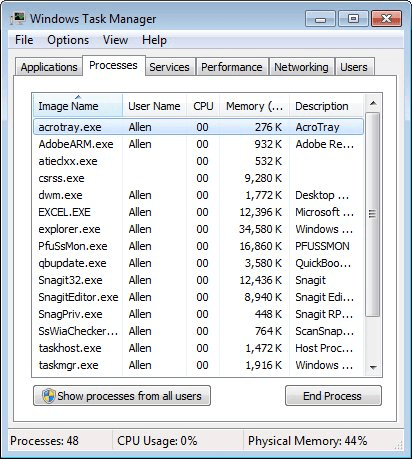 You have to scroll horizontally to see them, but there are dozens of available columns of information. The above figures show each process's Name, Status, CPU, Memory, and more. (The exact wording for the columns will vary depending on your version of Windows.) You can choose which columns to display by pulling down the View menu and selecting them. The Show Processes from All Users button controls which processes you see in the dialog box—only those of a single user or those from all users.

If there's a process that's "hung" or consuming ever-increasing amounts of memory or perhaps has a lock on a file that you need, you can terminate that process by clicking it and then clicking the End Process button.

There are more choices available to you, too. If you right-click on a process you'll see a Context menu that offers a number of choices. This menu allows you to, among other things, set the process's priority and affinity (i.e., which of the CPU cores it's allowed to run on). These are particularly useful if you have a process that is consuming a lot of the CPU and making the system slow for everything else. By relegating it to a subset of cores and/or reducing its priority you can improve your overall system performance without taking the drastic step of terminating the process.

When you're finished working with the Task Manager, you close it either by clicking the dialog box's Close button or by pressing Esc.

Getting Rid of Hidden Thumbs.db Files

A hidden file that the system uses to speed performance of your viewing folders containing pictures is called Thumbs.db. ...

The Pictures folder is one of several system libraries created in Windows by default. This library is specifically ...

Finding apps to help you with your work or relaxation has never been easier thanks to the Microsoft Store. Quickly look ...

Want to change what happens when Windows is started? It's easy to make changes if you know how to use the System ...

One of the many functions of the Windows Task Manager is to allow you to control processes running on your system. If you ...

Most of the objects that Windows makes available in its interface possess properties. These properties allow you to ...