Pinning a Shortcut to the Taskbar

To pin a non-application shortcut to the Taskbar you need to create a second shortcut whose target is the first shortcut and ensure the second shortcut invokes the first using Explorer. Sound confusing? It needn't be; the details for doing this are as follows.

Right-click an open area on your desktop (or in any folder) and choose New | Shortcut from the resulting Context menu. I happen to have Microsoft Streets & Trips installed on my computer, and it creates files with an ".est" extension. I want to point my shortcut to "C:\Users\bdysert\Documents\Home.est", so that's what I type for the item's location. (See Figure 1.) 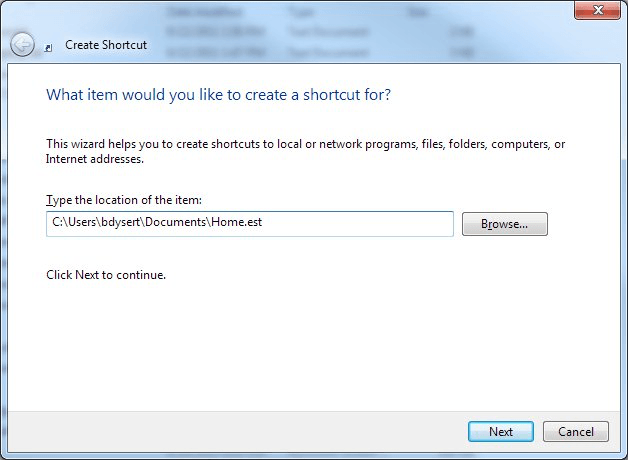 After clicking Next, I type a name for my shortcut (such as "Home") and click Finish. I now have a shortcut that opens my "Home.est" file, but I can't directly pin my new shortcut to the Taskbar because it's not an application shortcut.

Now create a second shortcut. For the location, use the Browse button to locate and select the "Home" shortcut, but before clicking Next, insert the word "Explorer " (without the quotes) at the beginning of the location box. (See Figure 2.) 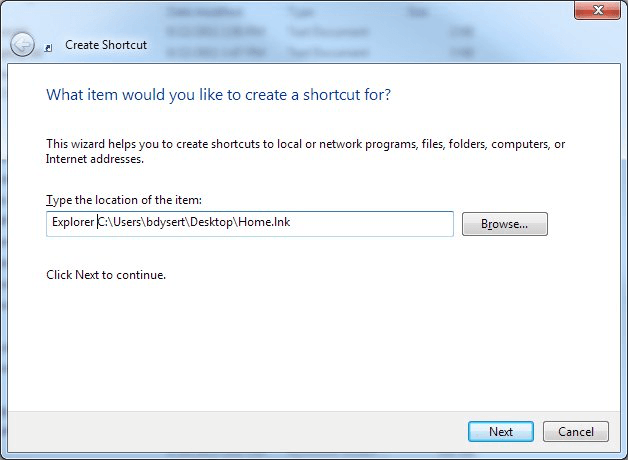 This tip mentioned creating the shortcuts on the desktop, but in reality you probably want to create a special "Shortcuts" folder somewhere on your hard drive. This is where you can keep the shortcuts you create and you are then free to create the second (pinnable) shortcut anywhere you like.

Assigning a Shortcut Key to a Start Menu Item

Reducing the transitions between the keyboard and the mouse is a practice that can improve efficiency. Toward that end, ...

If you work at the command level very much, you may want to change the fonts that are used. You can control what ...

CutePDF Writer is an extremely versatile utility that allows you to create PDF files from virtually any application that ...

The Notification Area is located at the right side of the taskbar. It represents an active area of information for ...

Choosing an Icon Size for the Taskbar

Choosing an icon size for the taskbar is a quick and simple process. This tip explains how it's done.

Move the Windows 11 Taskbar to the Left

Windows 11's new Taskbar puts the Start menu and apps front and center. In this tip you learn how to move the Taskbar to ...

Great Tip! This looks like a charm. Thanks for the excellent tutorial.

Nice tip.
As an alternative for quick access, I use the "Quick Launch" toolbar that is already part of the Taskbar. (Windows7)
Right click the Taskbar > Toolbars > Check Quick Launch (or Properties > Toolbars).
I put all my shortcuts in the folder
C:UsersUserNameAppDataRoamingMicrosoftInternet ExplorerQuick Launch.
They can also be organized in subfolders.

This is really nice to know. Thanks.