Adjusting the Taskbar for Multiple Displays

To arrive at the place that lets you customize your Taskbar, right-click an empty space on your Taskbar and select Taskbar Settings from the resulting Context menu. The following window appears: (See Figure 1.) 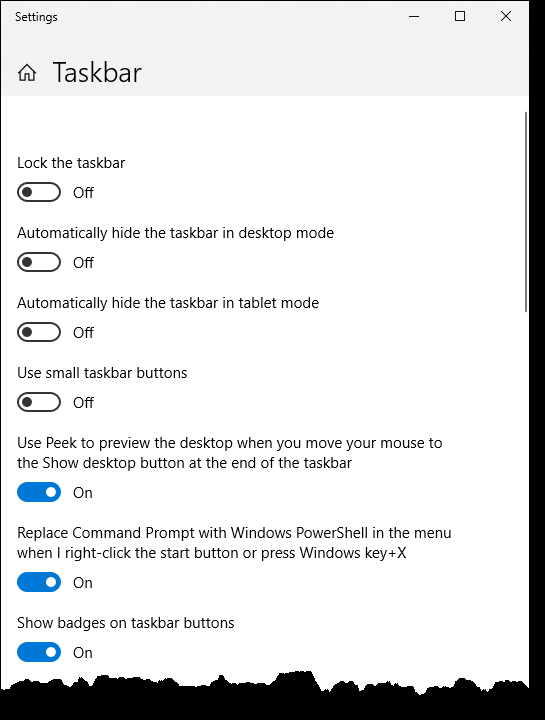 What is shown in the figure are the top Taskbar settings. To get to the ones dealing with multiple displays you need to scroll down a bit. When you get there, you'll see an on/off switch that determines whether your Taskbar is shown on all displays or only on the main one. Next is a drop-down list where you can set how Taskbar buttons are shown: All taskbars, Main taskbar and taskbar where window is open, or Taskbar where window is open.

There is one final drop-down list, where you can set how buttons are to be combined on other taskbars. You can combine buttons on other Taskbars: Always (hide labels), When taskbar is full, or Never.

Changing the Size of Icons Used by Windows

Microsoft Windows can be highly personalized to suit your needs. This personalization includes the ability to change the ...

Customizing What Appears on the Right Side of the Start Menu

You're probably used to seeing your Start menu appear a certain way. But is it the most effective display for how you ...

Changing How Tasks Appear on the Taskbar

The Windows Taskbar is much more robust than it was in previous versions of the operating system. One of its many ...

The Start screen can server as your launching pad for whatever programs you use on your system. If your Start screen ...

Changing Where New Media is Saved

You can specify where Windows 10 saves new media. This quick change will allow you to better control how your media is ...

ReadyBoost promised to provide a hot-swappable addition of memory that could end up improving system performance. Whether ...

I appreciate placing the icon in the "taskbar where the window is open". Quite useful.